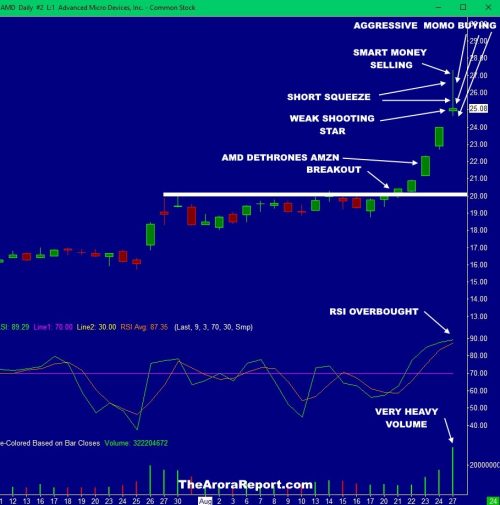 For a long time Amazon has been a favorite of the momo (momentum) crowd in this momentum-driven stock market.

Amazon AMZN  had been consistently ranked No. 1 in money flows. Recently all the planets aligned for AMD AMD  and AMD dethroned Amazon to become No. 1. The planetary alignment for AMD included troubles at competitor Intel INTC, a new product introduction, a technical breakout, a short squeeze and an analyst setting a $30 share-price target based on his information that many institutions were looking to take big positions in AMD.

Now there is a so-called shooting star getting in the way. Let us explore with the help of a chart.

Please click here for an annotated chart of AMD along with the technical analysis. Please note the following:

• The shooting star formation in the case of AMD is a weak one because the smart money (professional investors) stopped selling near the close.

• The chart shows the major technical breakout for AMD.

• The chart shows when AMD dethroned Amazon and became No. 1-ranked based on the ZYX Change Method. Please see “AMD dethrones Amazon in investor money flows.”

• The chart shows that when the momo crowd was aggressively buying AMD stock, running it up over $27, the smart money started aggressively selling. The trigger for smart-money selling appeared to be the ending of this leg of the short squeeze and a bullish analyst’s call.

• The chart shows that the relative strength index (RSI) is very overbought and the momentum is waning. This makes the stock vulnerable to a short-term pullback.

• The chart shows that the shooting star was formed on very heavy volume. This is considered bearish….Read more at MarketWatch.