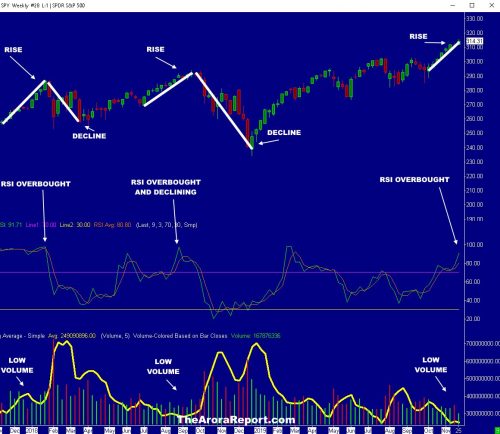 Some say the stars are aligned for a so-called Santa Claus rally.

That refers to a rise in the stock market in the last week of December and the first two trading days of January. The reason is that low liquidity makes it easier to push up the market. Last year was an exception when the stock market plunged in December.

It’s important for investors, however, to consider different viewpoints.

Let’s do that by reviewing a chart. Please click here for an annotated chart of S&P 500 ETF SPY which tracks the benchmark S&P 500 Index SPX.

• The chart shows three points when the relative strength index (RSI) was overbought on a weekly chart.

• The chart shows that for each of these three points, the volume was low.

• The left-most point on the chart shows a rise, similar to the one happening now, in the stock market. This rise was followed by a decline.

• The point in the middle shows a rise similar to that in the stock market now. This rise was followed by a big decline.

• The chart shows the Arora buy signal given right at the bottom of the last decline.

• The chart shows that the Arora long-term portfolios were up to 62% protected prior to the big drop.

• The chart also shows a short-term trade in Nasdaq 100 ETF QQQ on leveraged ETF SQQQ to profit from the decline.

• An overbought stock market tends to be vulnerable precisely at a time when not many see a good reason for a decline, as is the case now. This is a caution flag.

• Performance chasing is on. In performance chasing, lagging money managers tend to throw caution to the wind and buy strong-performing stocks in an attempt to catch up with their benchmarks. This is a big part of buying that is occurring in mega-caps such as Apple AAPL, Amazon AMZN, Facebook FB and Microsoft MSFT. Semiconductors have been great performers. Stocks such as Intel INTC, AMD AMD, Micron Technology MU and Applied Materials AMAT may see more buying by lagging money managers. This is a positive. For details, please see “‘Performance chasing’ and Trump’s impeachment process could push the Dow to 30,000.”

• A big part of tax-loss selling is already done. This is a positive.

• Investors with large gains in taxable accounts are reluctant to sell before the year-end because they do not want to pay capital gains taxes this year. This is a positive.

• If the momentum in the stock market reverses, those with large gains, especially hedge funds, may want to sell to lock in profits. Such selling may accelerate the downward momentum. Looking ahead, this is a caution that investors should keep a careful eye on….Read more at MarketWatch.