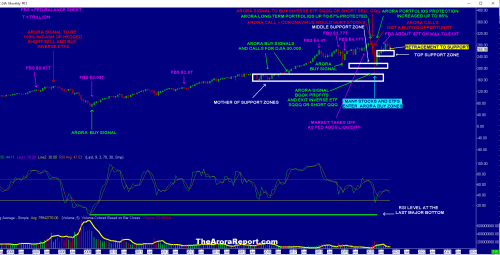 To gain an edge, this is what you need to know today.

My long time readers know that I am politically agnostic.  My sole job is to help investors. This post is not about politics but about investing.  It goes without saying that the election will have a major impact on investing.

The foregoing is important to help the readers read the post not through a political lens but through an investment lens, as hard as it may be for some readers.

It is important for investors to completely separate their politics from their investments to succeed.  Think of all those Republicans who missed out making money in the stock market during the Obama years and all those Democrats who missed out in the Trump years because they did not separate their politics from their investments.

Over the years The Arora Report has made a large number of bold calls.  At the time of each call, the call went against the prevailing wisdom and hardly anybody else on Wall Street was on our side.

It is humbling that all of such calls have proven to be correct.

When it comes to politics, the two bold calls that have proven correct are the Trump election and Brexit vote of ‘Yes.’  At the time of these calls, almost everyone on Wall Street was on the other side.

The reasons for the success behind The Arora Report calls have been the following elements:

One has to be careful looking at the polls. Here are the key points:

The president is decided by Electoral College and not by popular vote.  With the polarization of many states becoming solid blue or solid red, only a few swing states decide who wins.

This time Biden has many paths to win.  Trump has fewer paths.  Based on an analysis of the paths, only the following four states may matter.

In some scenarios, Arizona and North Carolina may become important.

If the foregoing was not jarring enough, in the end only about 20 counties within the states mentioned above will likely make the difference.

The Most Important State

Pennsylvania appears to be becoming the most important state.  Here are the key points:

Adjustments To The Polling Data

In our analysis, we are making several adjustments to the polling data.

After the foregoing adjustments are made, according to the data so far, Biden should win, but not so fast.

This poll in September tied Biden and Trump at 47%.  The poll had a margin of error of plus or minus 3.4%. The latest poll shows Trump leading Biden by 48% to 41%.  This is a shocking swing in Trump’s favor.

If history is any guide, Trump surge in Iowa may spill into Michigan and Wisconsin, two of the important states noted above.

There appear to be two late-breaking trends.

Both of these trends favor Trump.  There simply is not enough data to quantify these trends and put them in a model.

There are likely to be a lot of legal challenges from Republicans to the mail-in votes.

Investors need to understand that we do not have one election system in this country.  We have 50 election systems.  Of course here the concern is about only a handful of states.

Based on the information so far, how courts will rule on these challenges is not knowable at this time.

Opinions are a dime a dozen.

You already know that The Arora Report refrains from opinions unless backed by solid data and analysis. Based on the data so far, the best that can be said is that if the late-breaking trends stop in their tracks and the issue of court challenges is not a factor, Biden should win.  However, it is equally important to emphasize that the late-breaking trends are favoring Trump.  If these trends strengthen, Trump can easily win.

It is not the definitive call similar to the calls we have made in the past but this is the best that can be done at this time.

From an investment perspective, here are some of the definites or near definites we can share.

Adjustments To The Portfolio And New Trades

There will be many new opportunities both long term and short term.  The impact of t his election will be felt worldwide.  The opportunities will extend beyond the United States to the rest of the world.

Protection bands, cash levels and hedges may also need to be adjusted.

There will be new posts as appropriate in the real-time feeds of all four services.

The momo crowd is 🔒 (To see the locked content, please take a 30 day free trial)  stocks in the early trade. Smart money is 🔒.

The momo crowd is 🔒 gold in the early trade.  Smart money is 🔒.

The momo crowd is 🔒selling oil in the early trade.  Smart money is 🔒.

Our very, very short-term early stock market indicator is 🔒.  This indicator, with a great track record, is popular among long term investors to stay in tune with the market and among short term traders to independently undertake quick trades.

The dollar is stronger.

Trading futures is not recommended for most investors. The purpose of providing this information is to give an indication of the premarket activity that usually guides the activity when the market opens.

DJIA futures are up 334 points.

Protection Bands and What To Do Now?

It is important for investors to look ahead and not in the rearview mirror.

Consider continuing to hold existing positions. Based on individual risk preference, consider holding 🔒 in cash or treasury bills or short term bond funds or allocated to short term tactical trades and short to medium-term hedges of 🔒and short term hedges of 🔒. This is a good way to protect yourself and participate in the upside at the same time.

It is worth reminding that you cannot take advantage of new upcoming opportunities if you are not holding enough cash.  When adjusting hedge levels, consider adjusting partial stop quantities for stock positions (non ETF); consider using wider stops on remaining quantities and also allowing more room for high beta stocks.  High beta stocks are the ones that move more than the market.

THE BEST CYBER GIFT YOU MUST CONSIDER

The Best Cyber  Gift! Are you searching for the best cyber gift? How would you like a gift that can help ...

THE BEST BLACK FRIDAY GIFT YOU MUST CONSIDER

CONGRATULATIONS FRIENDS! ARORA TARGET OF DJIA 30K REACHED — TARGET GIVEN WHEN DJIA WAS IN 16K RANGE

To gain an edge, this is what you need to know today. Yellen Rally Extends Please click here for a chart of S&P ...

To gain an edge, this is what you need to know now. Buying Under The Surface Please click here for a chart of Nasdaq 100 ...

To gain an edge, this is what you need to know now. Technical Failure Please click here for a chart of Dow Jones ...

To gain an edge, this is what you need to know today. Tepid Reaction Please click here for a chart of S&P ...

Go Figure! Please click here for a chart of Nasdaq 100 ETF (QQQ). Note the following: This morning, there was excellent news ...

SHORT SQUEEZE IN THE STOCK MARKET AHEAD OF BAD WEEKEND HEADLINES

To gain an edge, this is what you need to know now. Stock Market Mechanics Please click here for a chart ...

To gain an edge, this is what you need to know today. Sentiment Is Important Please click here for a chart of Nasdaq ...

To gain an edge, this is what you need to know today. Potential Triple Top Concern Please click here for a chart ...

To gain an edge, this is what you need to know today. Reduce Cash And Hedges Both cash and hedge levels are ...

Buy zones are very powerful. When a stock dips into the buy zone you buy it.  If you were following ...

SPECTACULAR JOBS CREATION, TRUMP AND GEORGIA MAY GET IN THE WAY

To gain an edge, this is what you need to know now. The Chart Please click here for a chart of S&P ...

PRUDENT INVESTORS: HERE ARE THE ‘MUST KNOW’ TAKE AWAYS FROM THE ELECTION SO FAR

To gain an edge, this is what you need to know today. Election Here are the key points: There was no blue ...