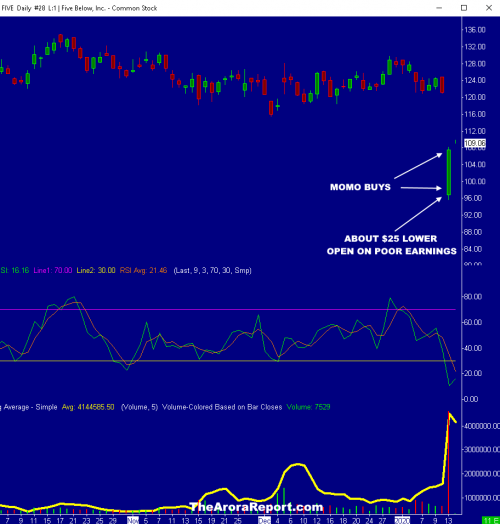 Earnings are the single best guide in the stock market in the long term.

In the short term, sentiment rules.

Only 8% of the strong move up in the stock market last year was attributable to earnings. The rest was triggered by the Federal Reserve reversing its policy of raising interest rates, which boosted sentiment, especially among the momo (momentum) crowd.

In short, sentiment is driven by fear and greed. The CNN Fear & Greed Index stands at 90, representing extreme greed. Our proprietary sentiment indicator at The Arora Report differs from CNN’s conclusion in that the stock market is not yet at an extreme bullish level; it is approaching the extreme zone.

Earnings season is starting. And this level of greed is producing a bad setup. Let’s explore the issue with the help of a chart.

Please click here for an annotated chart of Five Below FIVE.

• Five Below is a high-flying retailer that is considered Amazon-proof.

• For a retailer, the stock is very expensive, trading at a trailing price-to-earnings (P/E) ratio of 39.

• The chart shows that the stock gapped down 14% after the company reported poor earnings. On Tuesday morning the stock rebounded, rising over 4% as of this writing.

• In a normal market environment, an expensive retail stock like Five Below would have continued to fall after the gap down at the open.

• Delta Air Lines DAL  reported earnings that were better than the whisper numbers. But that is a special case because the airline is benefiting from the trouble of other airlines related to Boeing BA, +0.

• The vast majority of earnings are still ahead.

Looking at economic data and the history of earnings, there is a high probability that overall earnings this season will disappoint.

It is conceivable that in the short term, stock market investors may focus only on the earnings of those five stocks, plus semiconductor stocks, while ignoring other earnings….Read more at MarketWatch.

On May 28 in the Morning Capsule that is provided to paid subscribers to The Arora Report, we wrote: Airlines are ...