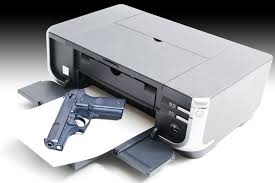 Lately there has been much hoopla about 3D printed guns.  The time is fast approaching when almost anyone will be able to print a 3D gun at home using readily available and inexpensive 3D printers from the likes of 3D Systems DDD  (DDD), Stratasys (SSYS) and ExOne (XONE).

Regulation: It would seem that it would be difficult for the government to regulate 3D printed guns in  the same way as traditional guns.   After all, the government is going to have difficulty in regulating what people do in the privacy of their own garage. The government may choose to act smarter and instead of regulating the printing of guns, it may simply regulate the sale of 3D printers.  All 3D printers are run by software. The government may simply insist that 3D printer manufacturers install software that prevents printing of a hollow cylinder of a certain size, a firing pin, or a certain type of spring.

Reliability:  3D printers typically use plastics.  Firing a gun creates heat and heat melts plastic.  Defense Distributed used a 3D printer manufactured by Stratasys bought on eBay for $8,000 and using inexpensive plastic made from acrylonitrile, styrene and butadiene.  There are higher end materials that can handle more heat but they are more expensive.  They also require high-end printers with costs in six figures. The ability to print guns with reliability on par with conventionally manufactured guns at a competitive price is far, far away…Read more at Forbes

This post was published on ZYX Short Sell Change Alert.  3-D printer maker VJET is short from $69.43.  As of this writing it ...

This post was just published on ZYX Short Change Alert. Over the years, many companies we shorted at very high prices ultimately went ...

The first presidential debate between Hillary Clinton and Donald Trump is scheduled for Sept. 26. The secret to success in ...

This post was just published on ZYX Buy Change Alert. SWHC is a gun manufacturer.  The main reason behind surging gun sales is ...

This post was just published on ZYX Buy Change Alert. SWHC is a gun maker.  It reported earnings in line with whisper ...

The biggest and the most popular 3D printing company 3D Systems DDD is down about 9% even after reporting decent earnings ...

It's no secret that 3D printing is hot. Stocks in the space have been the favorite of momentum investors. There ...

This post was just published on ZYX Buy Change Alert. 3D printer SSYS has been a momentum darling.  The company just did ...

Gun control legislation in Washington is moving at a snail’s pace, if at all, but technological developments are moving at a much ...

In last week’s State of the Union address, President Obama mentioned Apple and 3D printing.  Apple CEO Tim Cook was given a prominent ...

My heart goes out to the victims, the families and friends of the tragedy at Sandy Hook Elementary School in ...