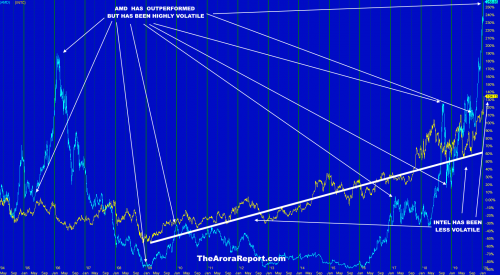 The stock market, it seems, has been going straight up. And now the market is expensive.

Make no mistake about the real reason for the market’s rise. This chart shows that stocks are moving up in lockstep with the Federal Reserve printing money. And the momo (momentum) crowd is following along obediently.

In this situation, what is a conservative investor to do? Is there anything left to buy?

No worries, there are many strategies that conservative investors can use. Intel INTC shows the way. Let’s explore with the help of two charts.

Please click here for an annotated chart of Intel that was published in 2017.

• In 2017, I was getting emails from investors similar to the ones I am getting now. The stock market had been going up for eight years. Conservative investors were trying to figure out what could they buy that was safer.

• The Arora Report took a position in Intel with an average price of $34.01. Subsequently we repeated the same call several times.

• The first chart shows the breakout in Intel from a triple top that provided investors with one of many subsequent opportunities to buy Intel stock after our initial buy call.

• At that time, Intel stock was inexpensive, had a nice dividend, a rock-solid balance sheet and a dominant position in the market. Many gurus had sell ratings on Intel.

• For the period shown in the second chart, Intel shows a price return of 134%. In addition, there have been significant dividends. This includes the big bear market of 2008-2009.

• On the surface, it would seem that AMD has been a significantly better investment. However, that is not necessarily true for conservative investors.

• Most conservative investors simply cannot stomach the volatility that AMD has shown.

• In this case, AMD stock has worked out, but that is not always the case. It is not uncommon for highly volatile stocks that at one time or another fall significantly, like AMD did, to never recover. Stocks that do not recover are far more common than stocks that do recover.

• Intel reported earnings and projections better than the consensus and the whisper numbers.

• Intel provides a dividend of 1.99% even after this increase. The yield based on the original buy price of The Arora Report is now almost 4%.

Investors are asking me how high can this stock market go. The July employment report, released Friday, is providing a relief ...

This post was just published on ZYX Buy Change Alert. Buy zones are very powerful. When a stock dips into the buy zone ...

Stock market bulls are giddy. What is there not to be happy about — the stock market mostly rises, and making ...

I have never been afraid to make bold predictions for the stock, commodities, bond and currency markets when supported by ...

The stock market is likely headed toward a new high fueled by borrowing and money printing, European leaders have agreed ...

The stock market has traced what’s called a negative reversal pattern, which reminds me of March 2000. In the year 2000, ...