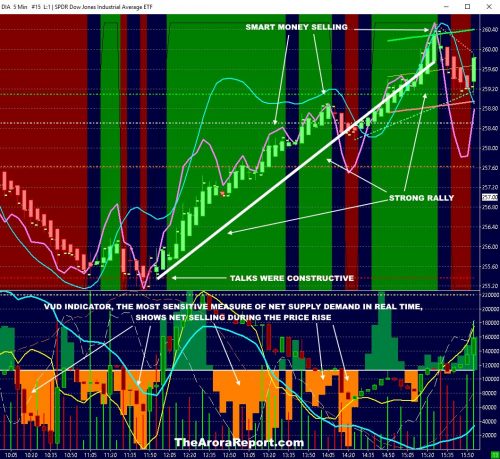 President Trump has a new calculation relating to his reelection and China tariffs. The calculation centers around a potential “President Biden.”

Many investors have not caught on to the new calculation and may be stuck in the old paradigm. They ought to wake up for their own protection.

Let’s explore this issue with the help of two charts.

Please click here for an annotated chart of ETF SPY,  which tracks the S&P 500 Index SPX.  For the sake of transparency, this is the same chart that was previously published.

• The first chart shows the comment by the administration that talks with China were constructive. The stock market staged a strong rally based on this vague comment. Later on there were more vague positive comments coming from the administration regarding China trade talks.

• The chart shows that the smart money — professional investors — was also selling into the rally.

• The second chart was published before the breakdown of trade talks. The chart shows two potential traps — a bull trap and a bear trap.

• The potential bull trap is characterized by the breakout of stock prices above the green line shown on the chart.

• The potential bear trap is shown by stock prices falling below the orange line shown on the chart.

President Trump tweeted: “China is DREAMING that Sleepy Joe Biden, or any of the others, gets elected in 2020. They LOVE ripping off America!”

The previous calculation was that Trump needed the China trade deal for his reelection, and for that reason a trade deal was imminent. Short-sighted investors were even rooting for a softer trade deal that would have not been good for the United States in the long term. You may recall that The Arora Report took the position that investors should be concerned about both the upside and the downside in the stock market as a China deal was not a sure thing….Read more at MarketWatch.