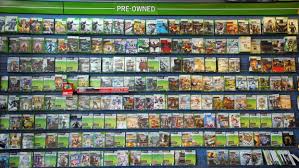 The controversy over used games has erupted ever since the unveiling of the new Xbox One byMicrosoft MSFT.   In my analysis, Microsoft is purposely creating this confusion about used games.

For 30 years gamers have been buying and selling used games.  The used games market is huge.  GameStop GME, the self-proclaimed largest seller of used games, generated $572 million from used game sales in the quarter just reported.  Microsoft is not alone in wanting a slice of this revenue.

Before Xbox One was released, speculation was rampant that Microsoft may not allow used games but Microsoft has put that speculation to rest at the introduction.  Microsoft is clearly going to support used games.

The sum total of conflicting statements from Microsoft and interpretation by the gurus is that there is a strong possibility of a fee being charged for trading used games. The fee will be split between the retailer, such as GameStop, Microsoft and game publishers such as Electronic Arts or Activision.  There were several reports confirming this scenario but Microsoft has now refuted such reports.

“Over the past few days, we have been reading comments and message boards following the Xbox One announcement,” wrote Larry Hryb, who goes by his Xbox Live gamertag, Major Nelson, and is director of Xbox programming. “There are a few questions regarding used games. I wanted to clarify and provide this official statement: The ability to trade in and resell games is important to gamers and to Xbox. Xbox One is designed to support the trade in and resale of games. Reports about our policies for trade in and resale are inaccurate and incomplete. We will disclose more information in the near future.”…Read more at Forbes

Unemployment continues to rise in the U.S. amid a government-mandated shutdown of the economy. Initial jobless claims for the week came ...

For investors trying to navigate this stock market, not enough is known about the coronavirus. There is a divergence of ...

FREE $5500 PAYCHECK PLUS FREE RENT MAY BE AHEAD – HOW WILL THE STOCK MARKET REACT? $DIA $DJIA $SPY $AMZN $MSFT $AAPL $AMD $TSLA

Bills pending in Congress would provide free rent and mortgage payments during the coronavirus emergency, and a monthly check of ...