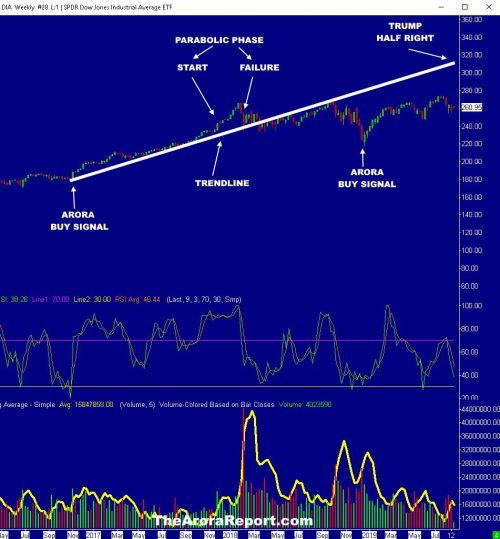 First and foremost, I am politically agnostic. My sole job is to help investors. This column is neither for nor against President Trump.

The Dow Jones Industrial Average DJIA would have been 10,000 points higher if President Trump had not done the “right” thing. Obama, Bush and Clinton should have done it, but they did not do it. What’s the right thing? To stand up to China. Before you send me hate mail, please understand that those are not my words. I am paraphrasing what Trump said.

Is Trump right? The answer to this question helps investors understand what may happen to the stock market if the trade war with China is resolved. Let’s examine with the help of a chart.

• The chart shows a trendline starting from the Arora buy signal. As Trump won the election, most sources were predicting a big stock market drop; at that time, The Arora Report gave a buy signal. The signal was not an endorsement of Trump but simply based on our proven algorithms.

• Take a look on the right side of the chart as to where the trendline is now. The trendline shows that if the trend would have continued, the Dow Jones Industrial Average would have been at 31,000 points right now. This would have made Trump half-right.

• The chart shows the start of a parabolic phase in the stock market.

• The parabolic phase would have likely continued if it were not for certain policies adopted by Trump.

• The chart shows failure of the parabolic phase.

• Based on my 30-plus years in the markets, I can confidently say that more likely than not, another parabolic phase may have started in the stock market if it was not for the trade war with China. After all, this market is controlled by the momo (momentum) crowd.

• A successful parabolic phase would have carried the market higher by 7,000 to 10,000 Dow points. This would have made Trump 100% right.

• The biggest Chinese ecommerce stock, Alibaba BABA would have likely been at $250 now if there was no trade war….Read more at MarketWatch.