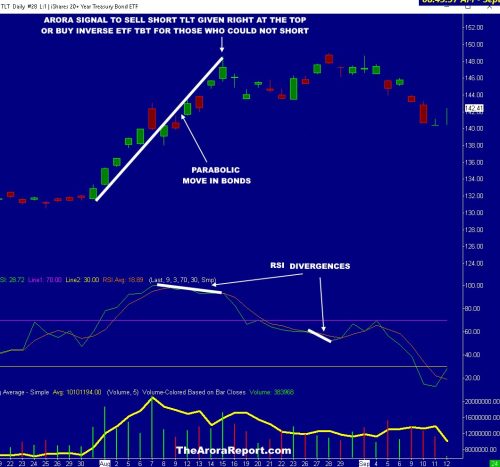 Draghi is known as Super Mario for adopting extremely stimulative monetary policy to pull Europe out of pending fiscal disaster. On Thursday the ECB announced another rate cut and more bond buying, a move that pushed up U.S. stocks.

In addition, there are rumors of an interim trade deal with China — but with trade deal news, never trust the first reports. Regardless, Trump is determined to run up the stock market. Please see “Trump’s China gambit is working for now — this chart tells the story” and “Trump claims the stock market would be higher if he hadn’t confronted China — is he right?”

Let’s pull this news together with the help of two charts.

Please click here for an annotated chart of S&P 500 ETF SPY, which mirrors the S&P 500 Index SPX. For the sake of transparency, this chart was previously published and no changes have been made.

• The first chart shows that bonds traced a parabolic move on recession fears.

• The first chart shows that The Arora Report gave a sell signal on TLT at a time when almost everybody was expecting it to go higher. With the benefit of hindsight, The Arora Report’s signal to short-sell bonds has proven spot-on. At the same time, a signal was given to buy inverse bond ETF TBT for those who could not short-sell. Both trades are now nicely profitable.

• The first chart shows that at a time when bonds were rocketing, the relative strength index (RSI) was showing divergences.

• The second chart shows a megaphone pattern. At the time the chart was first published, many gurus and media were using this chart to proclaim that the stock market was about to fall out of bed. The Arora Report took the opposite position, saying the upside move was possible. That call has turned out to be correct. Please see “A ‘megaphone’ pattern in the stock market sounds scary — but there’s no need for dread.”

• Note that the stock market is now overbought in the short term. Overbought markets tend to be vulnerable.

• Apple AAP stock has moved up after the introduction of new iPhones and a lower-than-anticipated price on its streaming service.

While most Americans are concerned about the coronavirus, a group of investors is placing bold bets on the leading sector ...

In short order, greed in the stock market has mostly taken over fear after reports of slowing new coronavirus cases ...

In stock market investing, often the hardest thing to do is to go against the crowd. The prevailing wisdom among stock ...

The Arora Report ZYX Buy Change Alert subscribers were provided with a coronavirus portfolio including 16 stocks.  This is in ...