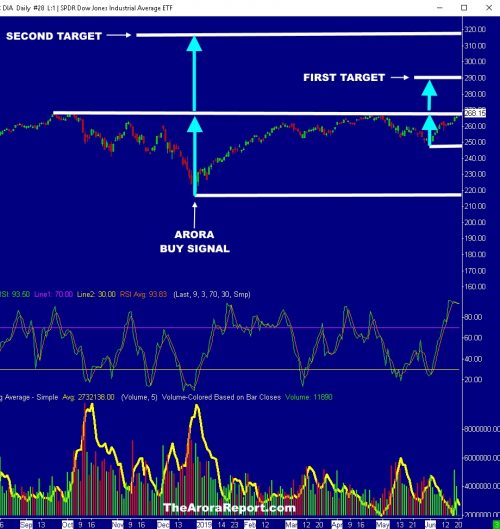 The Dow Jones Industrial Average may be heading toward 32,000, according to one measure that often works out.

Let’s explore with the help of a chart. Please click here for an annotated chart of the Dow Jones Industrial Average ETF DIA  which tracks the benchmark index DJIA.

• When the Dow Jones Industrial Average was at 16,000 points, I was among few who publicly called for the index to hit 30,000. Subsequently, I have repeated the call several times. As an example, please see “Here’s the case for Dow 30,000 in Trump’s first term.”

• The Federal Reserve on Wednesday didn’t cut official interest rates but took a dovish stance by saying policy makers would reduce rates if needed. Would any sane person have expected Fed to say anything different? However, the market now thinks there’s a 100% certainty of rate cuts.

• The market is optimistic about a U.S. trade deal with China when President Trump meets with President Xi at the G20 meeting June 28-29 in Osaka, Japan. At a minimum, the market is expecting a positive spin even if a deal is not reached.

• The chart shows the Arora buy signal, which has now turned out to be the cycle low.

• The stock market often, but not always, shows symmetry. This provides a good avenue to define measured targets.

• For the stock market, the first target is Dow Jones Industrial Average 29,000.

• In absolute terms, the stock market is expensive on a fundamental basis. However, stocks compete with bonds. If interest rates fall further, at least in theory, higher valuations for the stock market can be justified.

Be bullish but cautious

It is worth repeating what I have said before. There is a type of insanity among central banks and politicians. It starts with the bond markets and follows through to the stock markets. Let’s bring some common sense to the forefront. Is there a free lunch here? The answer from politicians, central bankers, stock market permabulls and mom-and-pop investors is a resounding “yes.”…Read more at MarketWatch.