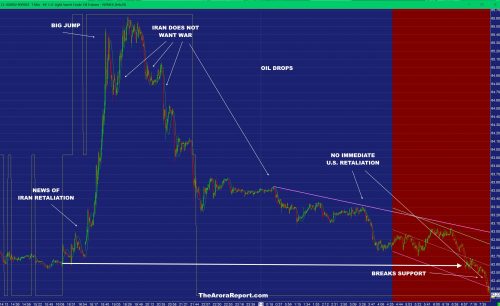 After Soleimani was killed and the stock market was falling, I said his death may not be as significant for the stock market as it seems. Now Iran has retaliated by shooting missiles on bases in Iraq where American soldiers are stationed.

Let’s figure out what is next for investors in the stock market with the help of three charts.

Please click here for an annotated chart of oil futures CLG20. I am not using the chart of popular oil ETF USO because it does not trade around the clock.

For the sake of transparency, the second and third charts have been previously published and no changes have been made.

• Since most investors watch the Dow Jones Industrial Average DJIA, it is worth noting that so far there has not been a significant move in the Dow.

• The first chart shows a big spike in oil when the news of retaliation by Iran hit.

• The first chart shows the volatility in oil near the highs when smart investors started to speculate that Iran did not want war as the retaliation was measured.

• The chart shows oil falling as latecomers figured out that Iran did not want war.

• The chart shows that oil took another leg down when there was no immediate U.S. retaliation.

• The first chart shows that oil broke support on speculation that Trump will let this pass and de-escalate the situation. In plain English, oil is lower as of this writing compared to where it was before Iranian retaliation.

• The probability is very high that Trump may choose to de-escalate, but investors should not be complacent because Trump is unpredictable.

• The probability is very high that Iran will continue to de-escalate, but investors should not be complacent because the Iran regime is clever; more attacks may come in different forms.

• The second chart is a 25-year look at the stock market. It is important to see how far the stock market has come. It is simply common sense to stay bullish but to have defensive measures in place to protect portfolios. At The Arora Report we provide precise cash levels and hedges to hold in addition to positions to hold and buy.

• Of importance on the second chart of the stock market is RSI (relative strength index) divergence. In plain English, it means that as the stock market has reached new highs, it is losing its internal momentum….Read more at MarketWatch.