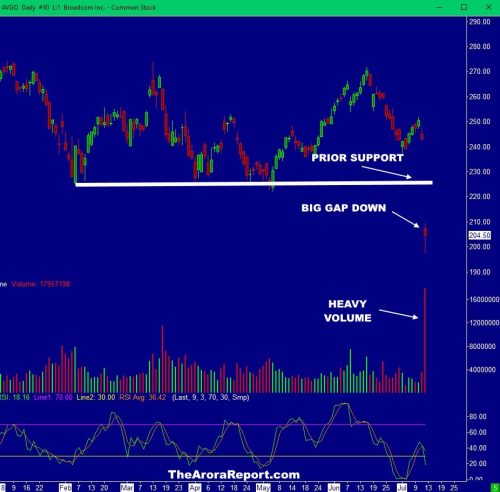 Investors who are looking for new opportunities in the stock market ought to pay attention now.

Irrespective of your like or dislike for President Trump, you have to give him credit for being the first U.S. president to take aggressive steps to stop China from dominating new technologies essentially by acquiring American technologies.

And there’s evidence that Trump is succeeding. Let’s examine the issue with a chart.

Please click here for an annotated chart of Broadcom AVGO.  Please observe the following from the chart:

• There is a big gap down in the stock.

• The gap down is significantly below the prior strong support, as shown on the chart.

• When the gap down occurs significantly below the prior strong support, it is considered very negative.

• The gap down is on heavy volume.

• Heavy volume often means there may not be much further downside.

Broadcom is a major semiconductor company that has Chinese connections. The company has used the roll-up model with much success. In a roll-up model, the company grows by buying other companies in the same business. The last major successful semiconductor buyout by Avago Technologies was a major American semiconductor company, Broadcom AVGO.  If Trump had his way, he probably would not have approved that buyout. Subsequently, Avago kept its ticker symbol “AVGO” but changed its name to Broadcom.

Then Broadcom tried to buy Qualcomm QCOM.   Qualcomm’s technology is in most smartphones. Qualcomm is a jewel of U.S. technology.

At that time, Broadcom was domiciled in Singapore. For this reason, the buyout proposal came under national security review. To help with the national security review, Broadcom changed its domicile to the U.S. And Broadcom’s CEO had his picture taken with Trump. However, that did not help. The Trump administration rejected the buyout on account of close ties between Broadcom and China.

Qualcomm is in the process of buying Dutch semiconductor company NXP Semiconductors NXPI . The attraction of NXP is that it makes semiconductors for automotive, security and the internet of things (IoT). IoT and self-driving cars are a major growth area in the future. All regulators in the world except China have approved the buyout of NXP by Qualcomm. Thus, NXP has become political football in the U.S. and China trade war….Read more at MarketWatch.

The U.S. Senate has unanimously challenged the Chinese government at a critical time for trade talks. In a boost for ...

The surprise announcement by President Trump of imposing new tariffs on goods imported from Mexico does not change a previously ...

President Trump’s ban on supplying technology to Huawei, the Chinese telecom giant, is spreading beyond U.S. shores. Companies in Europe and ...

Think what you may of President Trump, but there is an undeniable fact. If you watch the stock market as closely ...

Apple’s stock has been climbing. The sentiment is bullish. The company is cash-rich. The stock is inexpensive, and any China ...

The U.S. stock market is at an inflection point. The key question for investors is, “What is next?” Some traditional TA ...

Apple CEO Tim Cook was the last person to know that Chinese consumers weren’t buying iPhones in ever-increasing numbers. That ...