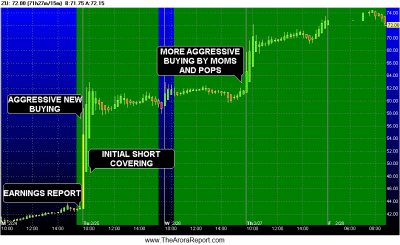 Starry-eyed investors in Zulily may lose their shirts if Amazon becomes more aggressive in the daily-deal business; considering Zulily’s success, Amazon moving in to crush Zulily is a highly likely event.

The chart illustrates the insanity that has set in Zulily ZU   stock.

Compare this to Tesla TSLA, often heralded as one of the most expensive stocks in this market, which has a PEG ratio of 2.56. Tesla has the potential to change the automotive business. You may ask what miracle Zulily is performing. Zulily is offering daily deals to moms on items such as children’s apparel. Nothing revolutionary here.

The saga started when popular CNBC personality Jim Cramer boldly proclaimed that he had found a stock in Zulily that could beat Amazon AMZN. Who would not want to be on the ground floor of a company that can beat Amazon? With stars in their eyes, investors started buying Zulily aggressively. After having closed at $42.84 prior to Cramer’s comment, as of this writing, the stock is trading in the premarket at $72.00, an inordinate move.