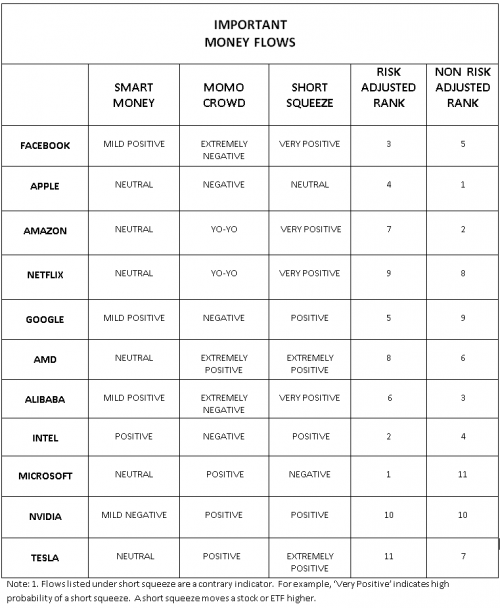 Offer to save $2,605 expires on Monday.  The character of the market is changing.  Build your skills to make millions — Bullet Proof Your Portfolio and Increase Your Returns.

For years, on the evening Apple reports earnings, my routine has been to carefully analyze the earnings report, listen to the conference call and ask for the data to be entered into our algorithms. The purpose always is the same — to come up with a new buy zone, a “buy now” rating and other signals that are appropriate especially for a trade-around position.

The most important metric I look at is the unit sales of iPhones, given that the iPhone contributes the vast majority of Apple’s AAPL profits. For practical stock analysis purposes, Apple is an iPhone company. Yes, I know it has other products. In the conference call, Apple shocked by saying that it will no longer release unit sales. What does this mean? Let’s explore with the help of a chart.

Please click here for the chart of money flows in 11 popular tech stocks based on my proprietary algorithms. Please note the following:

• As the chart shows, “smart money” flows in Apple have remained neutral even after Apple’s shocking announcement. Isn’t the smart money concerned about Apple hiding its unit sales numbers? I will explore this later in this column. The smart money represents sophisticated investors who act based on deep analysis and better information.

• Momo money flows have been like a yo-yo in Amazon AMZN,   and Netflix NFLX.

• As the chart shows, momo money flows among semiconductor stocks are extremely positive in AMD AMD, have turned positive in NVIDIA NVDA, and remain negative in Intel INTC.

• In contrast to momo crowd, smart-money flows are mild positive in Facebook and Alibaba.

Why is Apple hiding?