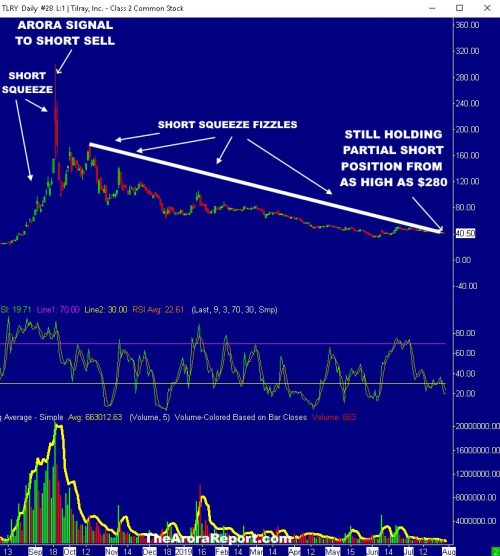 Beyond Meat’s stock is flying high. And I have been getting more emails on this stock than any other. A good way to think about this stock is to ask the question: “Is Beyond Meat like Tilray or Tesla?”

Let’s explore the answer with the help of a chart.

Please click here for an annotated chart of Tilray TLRY. Tilray was the favorite stock of the momo (momentum) crowd, just like Beyond Meat BYND is now. Please note the following:

• The chart shows that Tilray’s stock experienced a massive short squeeze after the IPO. Algorithms at The Arora Report show that the majority of the rise in Beyond Meat’s stock is due to a short squeeze, just like Tilray.

• In Tilray, the short squeeze was facilitated by a low float after the IPO. Beyond Meat also has a low float.

• Tilray did a secondary offering to take advantage of the high stock price, just like Beyond Meat is doing now.

• The chart shows that The Arora Report gave a signal to short-sell Tilray at $280. The stock is trading a $40 as of this writing. A partial position is still being held. In short selling, money is made when a stock falls.

• Before the decline in Beyond Meat, our system at The Arora Report gave a short-sell signal. However, our human judgement caused an override of that signal and did not publish it, primarily because no shares of Beyond Meat appeared to be available for borrowing. We could have published the signal, but that would have frustrated investors because the shares were not available.

• Tilray had the first-mover advantage in marijuana, just like Beyond Meat has in plant-based meat.

• Now that the short squeeze is over, Tilray’s stock no longer flies on the news of partnerships. Expect a similar fate for Beyond Meat, with the exception if it announces an exclusive partnership with a large company such as McDonald’s MCD.

• Beyond Meat is always making headlines in financial media, just like Tilray did….Read more at MarketWatch.

The U.S. Food and Drug Administration has thrown a big impediment in the way of marijuana investors. Before discussing the FDA’s ...

What does fake meat and marijuana have in common? The commonality is that investors either made a lot, or lost ...

Beyond daily gyrations, the U.S. stock market is still positive. The momo (momentum) crowd is bullish and aggressively buying shares. (The ...

MUSK REIGNITES THE DREAM OF $1000 TESLA STOCK, BUT NOT SO FAST $TSLA

A great earnings report from Elon Musk’s Tesla on Wednesday reignited the dreams of Tesla bulls. Before investors get pulled ...

Earnings season has started. Wall Street is bullish on the first phase of President Trump’s trade deal with China. The ...

I’ve warned investors that making money in marijuana stocks is not as simple as loading up when the news is ...

Marijuana investing has a bright, long-term future. A lot of money will be made in marijuana stocks. Many investors saw the ...

Prudent investors pay attention to money flows because that gives them an edge. Professionals already know they are competing with the ...

IF YOU COULD BUY ONE ETF FOR THESE MARKET CONDITIONS, THIS WOULD BE IT $USMV $SPY $QQQ $DJIA $SPX $AAPL $AMZN $GOOG $UNH $BA $GS $HD $MCD $VZ

Global economic growth is slowing. The Organization for Economic Cooperation and Development (OECD) has cut its growth projection to 2.9% ...

When marijuana stocks were rising, many investors got caught up in the excitement and bought large quantities at high prices. ...