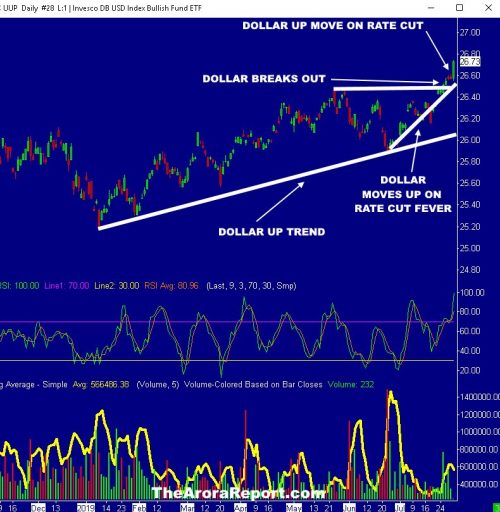 Stock market investors are addicted to easy money and, just like an addict, they want more easy money.

The bubble in many assets, not only stocks, is getting bigger across the globe. The Federal Reserve pumped more air into the bubble with an interest-rate cut, but not as much air as bulls wanted. The bulls do not like that they did not get what they wanted. Prudent investors are asking, “What now?”

Let’s examine with the help of a chart.

• The dollar index rises when the U.S. dollar moves higher against a basket of currencies.

• In theory, the dollar should go down on a rate cut and go up on a rate hike. The reason is that money moves out of a currency where the interest rate is cut.

• The chart shows that instead of going down, the dollar moved up on the rate cut.

• The chart shows the dollar previously broke out to the upside instead of breaking down as the Fed decision approached.

• The chart shows a strong up move in the dollar as the rate cut fever picked up steam.

• The dollar has moved up in the face of Trump calling for a weaker dollar. There were even reports that the Trump administration was discussing intervention to lower the dollar.

• On the rate cut, instead of moving up as bulls had been forecasting, the three popular broad-based ETFs, S&P 500 ETF SPY, Nasdaq 100 ETF QQQ and small-cap ETF IWM moved down.

• The selling did not spare popular stocks such as Amazon AMZN, Facebook FB, Microsoft MSFT and Apple AAPL.

• The strength in the dollar in the face of a rate cut is a testament to the strength of the U.S. economy.