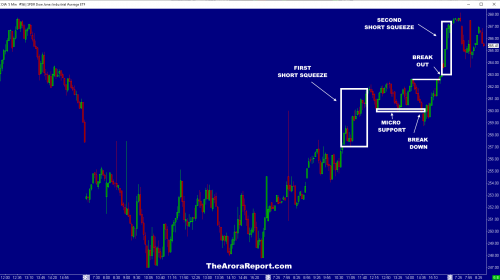 The Federal Reserve on Tuesday announced an emergency interest-rate cut to counter the effects of the coronavirus on the economy.

Expect calls for more spending on the fiscal side to increase the deficit from a trillion-plus dollars. Where is the money going to come from? The answer is easy: Just borrow and add to the national debt.

Let’s explore where the stock market rally is going with the help of two charts.

Please click here for a long-term chart of the Dow Jones Industrial Average ETF DIA which tracks the Dow DJIA. For the sake of transparency, this chart was previously published, and no changes have been made.

Please click here for an intraday chart of the Dow ETF.

• The first chart, with a monthly time frame, gives you the long-term perspective.

• The second chart, with a five-minute time frame, gives you a very short-term perspective.

• The first chart shows that on a monthly basis, RSI (relative strength index) is not oversold. This indicates there is more room to the downside.

• The second chart shows a critical event around 2:45 p.m. Monday. The stock market broke down below the micro support. After stops were taken out, the momentum reversed, and the breakdown failed. This led to a breakout, as shown on the chart.

• The second chart shows that the breakout at the end of the day led to a vicious second leg of a short squeeze.

I have been an investor and a student of the stock market for over 30 years. Based on our algorithms, I can confidently say that the biggest point rally ever was a head fake. However, the Fed’s rate cut, money printing and borrowing may turn this head-fake rally into a real rally.

According to our algorithms, about 75% of the Dow’s move up Monday was a short squeeze. In a short squeeze, short sellers feel compelled to buy. Short squeezes lead to artificial buying.

Short-squeeze rallies tend to be sharp and vicious. Historically, they tend to reverse….Read more at MarketWatch.

If you have been following along The Arora Report calls, you are in good shape because of the timely protection ...