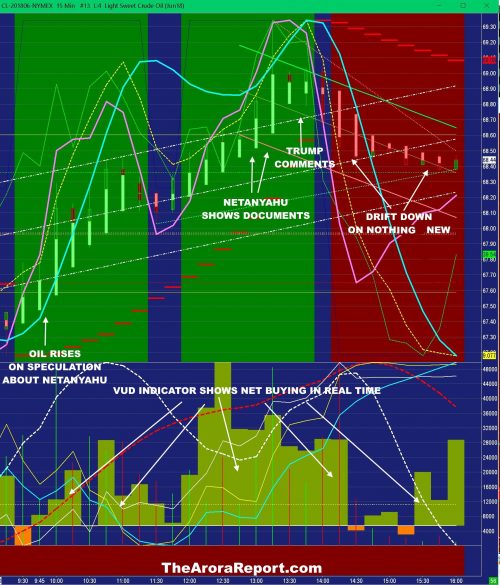 Prudent investors get ahead of major events.

One such event will be President Trump’s decision to either stay in the nuclear deal with Iran or withdraw. Iran is a major oil producer. If Trump withdraws and the oil supply is disrupted, oil prices may spike. That would affect several sectors of the stock market.

Let’s explore with a chart.

Please click here for an annotated chart of oil futures CLM8.  Similar observations can be drawn from oil ETFs such as United States Oil Fund USO and VelocityShares 3x Long Crude Oil UWT.  Please observe the following from the chart:

• As shown on the chart, oil took another leg up when Netanyahu showed documents claiming to prove that Iran had been lying about its nuclear program.

• The chart shows that after a shallow pullback, oil tried to move higher again after Trump referred to Netanyahu’s dog-and-pony show positively in his joint press conference with a visiting leader from Nigeria.

• Smart players in the market quickly concluded that the so-called “proof” by Netanyahu was already an open secret. They started to sell oil.

• Oil continued to drift lower as close analysis of Netanyahu’s presentation showed that it was about the past and he did not present any proof that Iran was violating the nuclear deal.

Some believe that Trump is highly influenced by last-minute lobbying before he makes critical decisions. Earlier, French President Emmanuel Macron and German Chancellor Angela Merkel visited Washington to lobby President Trump to stay in the Iran deal…Read more at MarketWatch.

The Arora Report ZYX Buy Change Alert subscribers were provided with a coronavirus portfolio including 16 stocks.  This is in ...

There’s no vaccine for the coronavirus and few treatments for those who suffer from it. For investors, there are only a ...

Investing and trading are about making money, and you should never let your political opinions get in the way. Irrespective ...

THE ANSWER TO THE QUESTION AFTER CORONAVIRUS AND OIL CRASH – SHOULD I BUY OR SHOULD I SELL? $SPY $SPX $DIA $DJIA $SQQQ $QQQ $AAPL $AMZN $FB $GLD $DUST $GDX $SLV $MU

There’s a lot converging on investors today. Let’s sort it out. All signs were there for the coronavirus to move from ...

As the coronavirus spreads across the U.S., the question I am being most often asked is how low can the ...

As the coronavirus spreads, many investors are focused on the stock and bond markets. Why not gold? The Federal Reserve, in a ...

The Federal Reserve on Tuesday announced an emergency interest-rate cut to counter the effects of the coronavirus on the economy. Expect ...

This post was just published on ZYX Buy Change Alert.  Consider taking profits on NUGT Trade Around position in the zone of $32.18 ...

This post was just published on ZYX Buy Change Alert. This is suitable only for super aggressive sophisticated investors who are already well ...