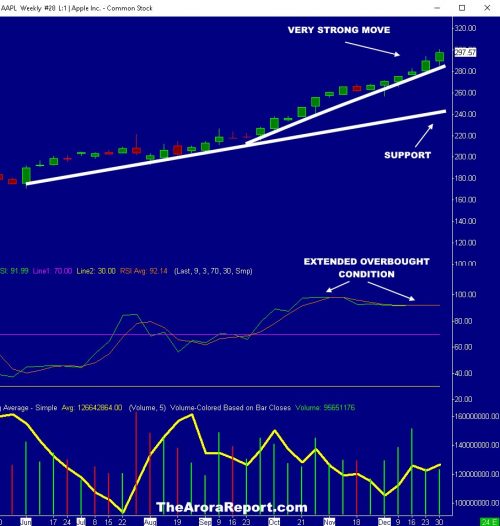 A general who was the architect of Iran’s military-related foreign policy was killed by a U.S. drone in Baghdad, Iraq. As a result, U.S. stocks are falling, and oil prices are rising.

The death of Gen. Qassem Soleimani was viewed by some as an assassination, owing to his power and influence in Iran and among proxy militias in the Middle East. (Please see “Who was Qassem Soleimani, and why is his death a major development in U.S.-Middle East relations?”)

To understand the real impact on investors, let’s start with two charts. You may be surprised to hear that Soleimani’s death may not be as significant for stock market investors as it seems.

• If I were writing this column earlier, I would have included a chart of oil, such as oil ETF USO. Now I am including a chart of Apple. There is a good reason. Please read on.

• The reason for including Apple and not oil is that the economy has changed. It is less reliant on oil. Yes, if the price of oil rises, it will negatively affect certain sectors such as airlines as well as retailers that cater to lower-income consumers. The U.S. became the world’s largest oil producer in mid-2018, while Iran’s energy industry has been hurt by crippling sanctions.

• Historically, the impact of such incidents has been short-lived. Experience is a great teacher. When the first Gulf War started in 1990, I started short-selling the market, only to see the market shoot straight up. Obviously at that time I did not have the experience I have now.

• Historical precedences aside, there is a small probability that this time may be different. The reason is that the U.S. has hurt Iran’s pride. When a nation’s pride is hurt, its leaders may not act rationally. The rational view is that it is in the interest of all parties to de-escalate the situation.

• Take a look at the 25-year chart of the stock market. The market has risen not because of oil but because of policies of the Federal Reserve and newer technologies.

• The conditioning of the market is that if there is severe retaliation from Iran, the Fed will come to the market’s rescue.

• The first chart shows the strong move in Apple, which carries a large weight in indexes. As such, it has been one of the main propellers of the stock market, along with other large-cap stocks such as Amazon AMZN, Google parent company Alphabet GOOG,  GOOGL and Microsoft MSFT.

• The first chart shows extended overbought conditions for Apple. Such a pattern often augurs for more strength after a pullback.

• The first chart shows the support line for Apple, which is still high compared with where Apple stock was not that long ago…Read more at MarketWatch.