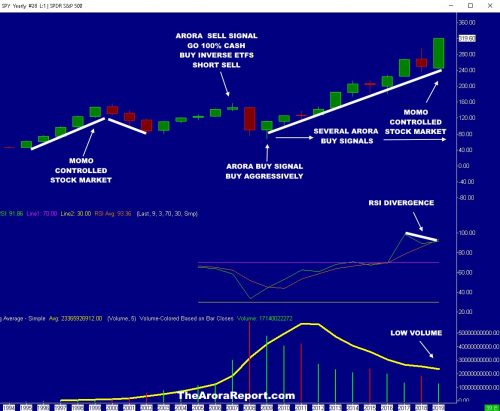 There are 10 things that stock market investors ought to watch out for in January.

First, let’s build the requisite background with the help of two charts.

For the sake of transparency, both charts were previously published and no changes have been made.

• From the first chart, the first target for the stock market is Dow 30,000 points, and the second target is over 32,000. Dow 30,000, during Trump’s first term, has been the longstanding target given by The Arora Report.

• To wit: When I gave a “buy” signal on Donald Trump’s election at a time when many were predicting a big stock market drop, it was at first met with incredulity. When shortly thereafter I called for a high-probability scenario of the Dow Jones Industrial Average hitting 30,000 points in Trump’s first term, I received a ton of hate mail. I have subsequently repeated that call several times. Please see “Here’s the case for Dow 30,000 in Trump’s first term.”

• The first chart shows that the stock market was overbought about a month ago but there was room to run. To determine overbought and oversold conditions, the relative strength index (RSI) is the best indicator for a number of reasons. However, in addition to the science of using RSI, it is also an art that investors ought to learn. In general, in trending markets, overbought markets often become more overbought.

• There is one striking aspect in which the present-day stock market is similar to that of 1999.

• The second chart shows RSI divergence. In plain English, it means that as the stock market has risen, internal momentum is not keeping pace. This is a reason for caution.

• The second chart shows that volume is low. This indicates a lack of conviction in the rally. This is another reason for caution…Read more at MarketWatch.

While most Americans are concerned about the coronavirus, a group of investors is placing bold bets on the leading sector ...

In short order, greed in the stock market has mostly taken over fear after reports of slowing new coronavirus cases ...

In stock market investing, often the hardest thing to do is to go against the crowd. The prevailing wisdom among stock ...