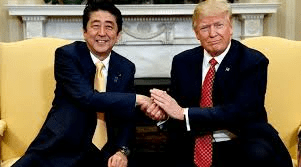 Donald Trump has accused countries including China and Japan of manipulating their currencies and running large trade deficits with the U.S.

Investors in Asia were on edge leading into the meeting between Japanese Prime Minister Shinzo Abe and Trump late last week. The economic policies of Abe, known as Abenomics, rely in part on a weak Japanese yen and exports to the U.S.

The news was that the meeting between Abe and Trump ended with handshakes, hugs, golf and a statement by Trump that he supports Japan “100%.” But the real news here is that there was no mention of a weak yen and Japan running a trade deficit.

In 2016, Japan ran a $68.9 billion trade deficit with the U.S., ranking second after China. So it appears that Abenomics has triumphed over Trump’s policies. Trump might have been influenced by geopolitical considerations to forgo the flashpoint of a weak yen and a trade deficit. While Trump and Abe were meeting, North Korea challenged them by launching a ballistic missile in the Sea of Japan.