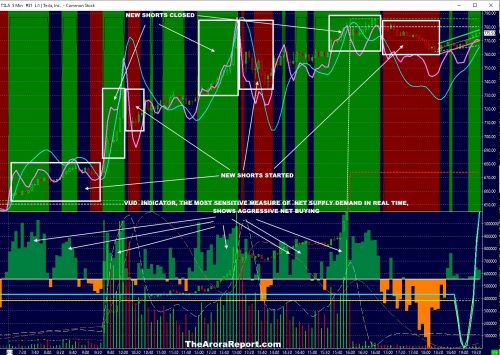 The shares TSLA  have become a vessel in which investors transferred their futuristic fantasies. It started during last quarter’s earnings report, which was a game changer. Tesla said it would make more than half a million cars in 2020 as it “has grown to the point of being self-funding.”

Since it is imagination that investors are trading on, there are no restrictions and no constraints. Isn’t it, say, a matter of time before Tesla makes millions of cars a year? Many investors have conviction that it will. Aren’t there too many variables to jump from half a million to many millions? No problem, just add perfect foresight to the conviction.

Let us not forget about advances in autonomous cars by Tesla, robo taxis, solar roofs and batteries. Could flying taxis from Tesla become our favorite mode of transportation? The sky’s the limit.

Tesla is so far ahead that nobody else can possibly catch up. It is a matter of time before everything around us is Tesla, or so the story goes. All that is great, but what about Tesla’s stock price 10 years from now? Tesla will be bigger than any other company, right?

I must admit that I do not have the wisdom, conviction and foresight of Tesla investors. Back in 2018, I could see Tesla’s stock going to $1,000, but there was also potential for it to go to $60. Please see “Ignore the drama at Tesla and focus on the stock’s price zones to make money.”

It is said that “there’s many a slip ’twixt the cup and the lip.”

However, I do have insights derived from proven algorithms and decades in the markets about the recent move in Tesla stock.

Let’s take a more rational look at Tesla with the help of a couple charts.

• The first chart shows four price zones in which new short-selling positions were started. (Short-selling is a wager on a decline in securities prices.)

• The first chart shows three zones in which new short positions were closed.

• A short squeeze occurs when short sellers are either forced or willing to close a position at any price. This leads to significant artificial buying that is extremely aggressive in nature. Such buying causes stock prices to leap by extraordinary amounts.

• The VUD indicator (in green) on the first chart shows aggressive net buying.

• The VUD indicator pattern shown on the first chart, when combined with price action, is the telltale sign of a massive short squeeze. Note that a similar pattern can occur after major news such as buyout rumors, blowout earnings, management changes and clinical trial results. But no such thing was happening in Tesla at the time this pattern was traced….Read more at MarketWatch.