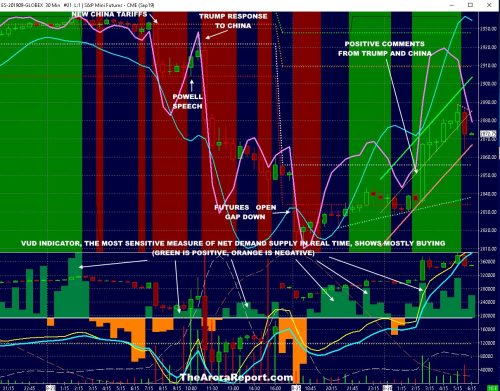 Many investors have missed the real story about the stock market and President Trump’s gambit on the China trade war.

• The chart shows that stock market futures were humming along when the unexpected news of China imposing new tariffs on U.S. goods came.

• The chart shows that the stock market fell on the news of new tariffs from China. The new tariffs were a clear escalation of a trade war.

• The chart shows that the stock market started moving up after the much-anticipated speech at Jackson Hole by Federal Reserve Chairman Jerome Powell.

• It is true that Powell did not come out and say that he was ready to comply with most of Trump’s commands. However, if you read the speech’s text carefully, there is an unmistakable conclusion that Powell has mostly given in to Trump.

• The smart money in the stock market clearly understood that Powell was dovish and started buying equities, as is clear from the chart.

• The chart shows that after Trump’s angry response, the stock market fell out of bed, with a major decline.

• The chart shows that the next time stock futures opened, they gapped down. Since many investors follow the Dow Jones Industrial Average, as a reference, at one point stock market futures were down equivalent of about 300 Dow points after having previously fallen over 600 points.

• Stock market futures jumped when China Vice Premier Liu He called for a “calm attitude” and consultation, and Trump said that China wanted to get back to the table again.

• The VUD indicator shows that during all of the selling, the indicator was mostly positive. In plain English, this means that sellers were very aggressive while buyers were being extremely careful; nonetheless, there was net buying throughout most of the tumultuous period. This is a short-term positive for the market….Read more at MarketWatch.