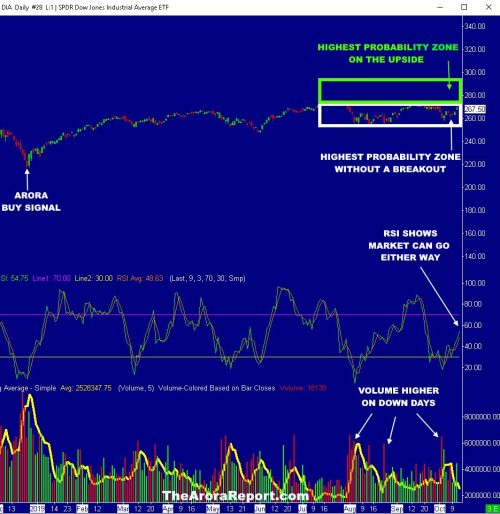 On the surface it appears that China and Wall Street won this round of the trade deal.

Who lost? It appears that the loser is America. China has taken advantage of the U.S. over the past 40 years. Let’s discuss a potential game plan for investors with the help of a chart.

Please click here for an annotated chart of Dow Jones Industrial Average ETF DIA. Investors also can use a chart of S&P 500 ETF SPY. Those with portfolios that are heavy in technology should keep an eye on the chart of Nasdaq 100 ETF QQQ.

• The chart shows the highest probability zone on the upside if there is a breakout on good news either on the trade front or from company earnings.

• The chart shows the highest probability zone without a breakout.

• The relative strength index (RSI) shows the stock market can go either way.

• The chart shows the volume is higher on down days. This indicates high risk in this stock market.

• The details of phase one of the trade deal are missing. Therefore it is not possible to draw a definite conclusion.

• The Trump administration is calling the deal substantial, but it is difficult to see how China did not get the better of President Trump.

• China has agreed to buy up to $50 billion in U.S. agricultural goods. This amount is only about $25 billion more than what China would have bought without a trade deal. China needs these agricultural products to feed its population.

• On the U.S. side, this is a minuscule amount for the U.S. economy.

• The agriculture portion of the deal does help Trump with farmers in his re-election.

• There is much said about China agreeing to currency transparency. Trump has been overplaying that China devalues its currency to gain an advantage in exports.

• The reality of the currency issue is that every time the yuan goes lower, capital outflows from China increase. China does not want capital outflows. For this reason, it is in China’s best interest to keep its currency stable.

• On the surface, the currency deal does not appear to give the U.S. any advantage.

• Chinese exports to the U.S. in September fell about 22% year over year. This is the result of the tariffs. China cannot afford higher tariffs. But in this phase one trade deal, China succeeded in Trump removing the tariffs that were supposed to go into effect on Oct. 15….Read more at MarketWatch.

This post was just published on ZYX Buy Change Alert. Please scroll down for current ratings in six time frames and current allocation ...