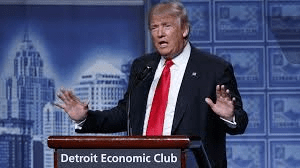 On Monday, Donald Trump presented his new economic plan at the Detroit Economic Club. While light on detail, there were a few things investors could take away from the speech. (And so we don’t get distracted with politics, let me state that I am neither for Trump nor Clinton. My sole objective here is to help investors.)

When looked at through an objective and apolitical lens, there is simply not enough hard data to conclusively show if Trump’s overall economic plan is good or bad for America. There is a lot of conjecture on both sides. Instead, I will focus on one of the central planks of Trump’s plan on trade that is supported by the hard data as discussed below, and the chart demonstrates it conclusively.

Trump is right about one thing

Trump says, “We do not win any more.” Whatever you may think of him, he is right on this one. The goal of every successful country, including the United States, in trade with other countries is to export more or equal to the imports over a period of time. There is only one word to describe running a huge trade deficit on an ongoing basis: “losing.” The U.S. Census Bureau’s Economic Indicator Division shows that the last time the U.S. had a trade surplus was in 1975. And the last time the U.S. had trade deficit of less than $100 billion was in 1995…Read more at MarketWatch