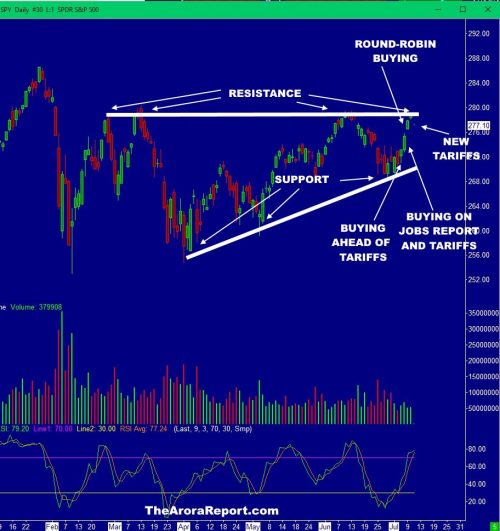 The momo (momentum) crowd followed the stock market higher from support to resistance, ignoring President Trump on the trade war.

Now the momo crowd is finding that Trump is aiming to win the trade war. Following the momentum and ignoring the risks of the trade war is not a prudent strategy.

Think twice before following the momo crowd if you are a prudent investor. The momo crowd often gets whipsawed. Let us examine with a chart.

Please click here for an annotated chart of S&P 500 ETF SPY.  Similar conclusions can be drawn from the charts of Dow Jones Industrial Average DJIA,  Nasdaq 100 ETF QQQ, and small-cap ETF IWM.  Please observe the following from the chart:

• The chart shows the trend line that has acted as support three times.

• The chart shows the resistance that has previously stopped the stock market advance three times, excluding this attempt.

• The chart shows the momo crowd buying ahead of the $16 billion of tariffs going into effect.

• The chart shows the momo crowd buying when the tariffs were actually imposed and on the jobs report. The jobs report was better than the consensus numbers but in line with the whisper numbers.

• From the chart, please note that the momo crowd ran up the stocks from support to resistance.

• The chart shows new tariffs coming into the picture as the Trump administration releases a list of goods worth $200 billion for new tariffs on Chinese goods.

The momo crowd has been buying the indexes, S&P 500 SPX, Nasdaq 100 NDX, and Russell 2000 RUT, and their favorite technology stocks such as Amazon AMZN, Facebook FB,   and Netflix NFLX.  There has been sporadic buying in bank stocks such as Bank of America BAC, Citigroup C,   and J.P. Morgan JPM.  For the most part, the momo crowd has ignored a majority of other good stocks….Read more at MarketWatch.